What’s not to love about Los Angeles: your sister and I arrived to beautiful blue skies and sunny sidewalks.  The palm trees in Santa Monica still leaning precariously. The air dry and salty. Chopped salad was first of the rank at La Scala in Brentwood (11740 San Vicente Blvd., Los Angeles) with KJ.  Do any other citizens of the world consume chopped salad like the west coast does? I’ve not seen it. Little C and I  made a stop (how could we resist??) at Lemonade, which has opened a second outpost in Brentwood. What a stunning array of flavoured fresh lemonades. Mine is still cucumber. Lots of gorgeous, unusual salads- Los Angeles is really the Queen of Salads….

C and I adored staying the week-end with the J family in Brentwood: a warm and tranquil oasis around a beautiful pool and lawn, purple Bougainvillea tumbling over the front of their spanish home. Even Lucky dog was in fine form, a gracious and inquisitive host. JDaddy cooked breakfast on Saturday morning, and we all sat at the kitchen table, catching up.

It was a girls night, as JDaddy was out at a basketball game and your dad was finishing up  work before joining us in LA. We girls ate Japanese and had a big catch up. Junior J was keen to introduce us to Blockheads Shavery, which I must say is a new taste sensation I love! I just wish everything in America wasn’t so huge! Blockheads serves thinly shaven flakes of extra cold ice cream. Flavours are plain, black sesame and green tea. Imagine a giant ice cream cup of the lightest flavoured snow flakes, topped with a fantastic choice of mochi, giant boba balls, coconut flakes, condensed milk. Yeah, I did die and go to heaven.( Even though my official line is that I am not an ice cream fan!) Sawtelle is jumping with a whole lot of new eating places: Vietnamese noodles, a sausage shop, and a slick little coffee place (where I met up with Bad Daddy full of news from filming with Joan Rivers….) called Coffee Tomo.

When your dad arrived, we moved to The Pool House, and we went out for an ‘only in LA’ type of night at the Sunset Tower. Dimitri,  The Tower’s high-profile maitre’d was having a spectacularly ‘off’ night, and we watched him in amusement. I wish I had a people’s equivalent of  the App ‘Shazam‘ because the place was thick with interesting types. Dad and I were amazed at morsels of overheard conversations. A very fun night on The Strip for old time’s sake! 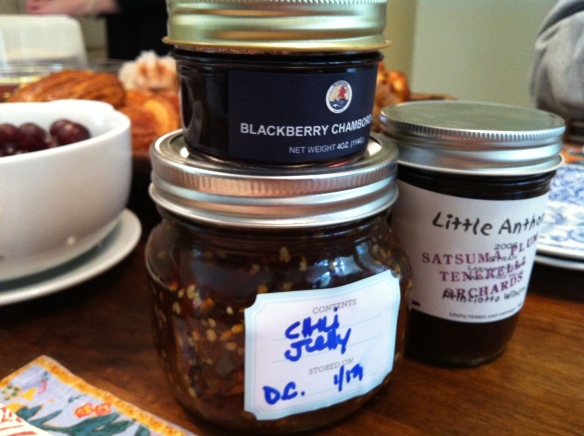 We had meals with good friends from Brentwood and Sherman Oaks to Venice, and it was lovely to be in homes we love with household pets like Toony and Chester, Monkey and Mac, Lucky and Ricky, Tina and Petey, and Cooper and Bruno: all such quirky characters! Friends you can keep in touch with when you move away, but pets you have to just go back and visit!

One restaurant meal we had out in the city was memorable: Playa is a successful flavour combination of Mexican and….Chinese!  It was a stretch to wrap my mind around that one, but as each dish appeared, my palate was amazed and challenged and completely won over. Spicy taco cones filled with shredded Szechuan chicken and fresh guac and lots of lime? Stupendous!

LACMA was fun; Ruscha in full splendour, as was the Caravaggio exhibition, Mapplethorpe if you dared and Stanley Kubrick. Hungry from art viewing, a food truck stop out the front on Miracle Mile for some Bombay street food: messy and delish! 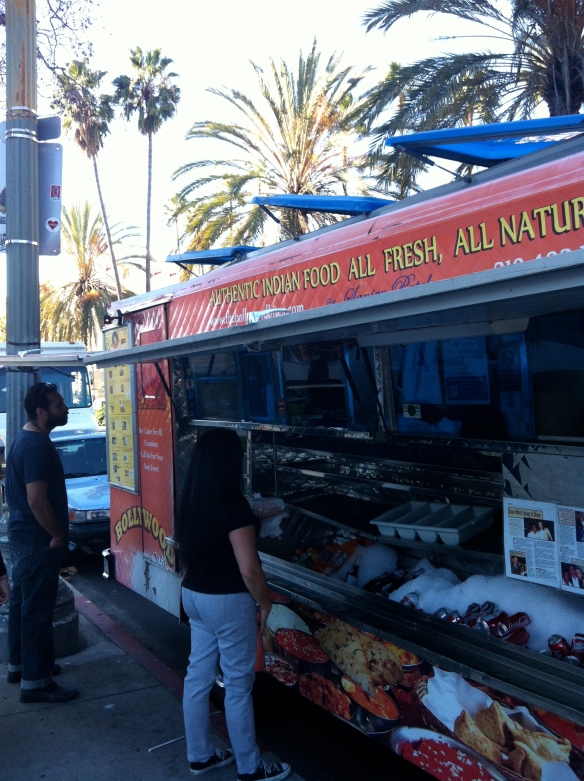 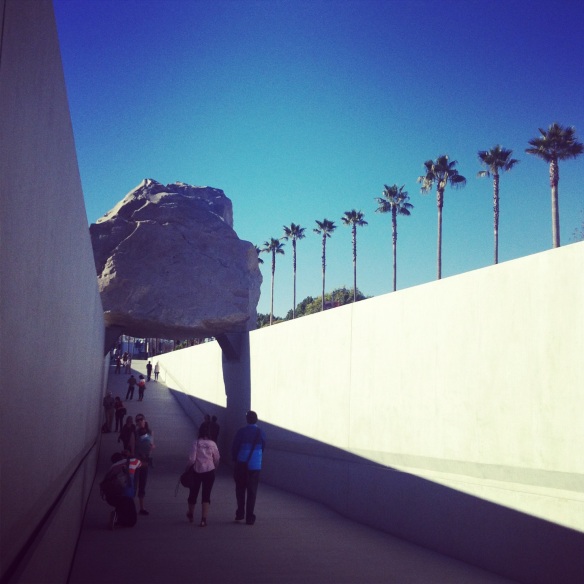 In N Out burger drive through, dad and I even snuck in a quick-lunch at Katsuya (still fabulous) before he went to meet up with Ed Ruscha. I went to the T & T Penthouse to see Ada. Little C and I also had warm hugs with Rosa.

Dinner at Milo and Olive one night with Ms. Guillot, catching up- its been a tough year for her. The new Zoe Nathan eatery on Wilshire is over-rated. And we waited an hour and a half for an uncomfortable stool at the bar. During the long wait squeezed in at the door, no one even offered us a drink- poor hospitality I say. I’d stick with her flagship Huckleberry, and of course Sweet Rose Ice Creamery is always good!

I spent the last morning in LA on a job: interviewing the dynamic artist couple that is Cindy and Curtis Ripley for my A Magazine series ‘Eating With Artists’ series. Curtis was cooking sweet potato waffles and Canadian bacon. Can you believe my luck?? Stay tuned for that article, coming out in mid Feb.

On our last day in LA, it was gently dripping with rain. I dropped off the Mini Cooper Avis rental, and had some time to spare before meeting dad and BT. Should I turn right on Westwood to head over to the Hammer, or should I hurry down the left side of the street to check out a recommended Persian ice cream place? I turned left. I think I’ll have to stop claiming that I don’t like ice cream…… A friendly chat with the shop owner, flavours of melon, almond, and refreshing cucumber at the Saffron and Rose ice cream shop in the heart of Tehrangeles. (1387 Westwood Blvd. Los Angeles, CA. ) 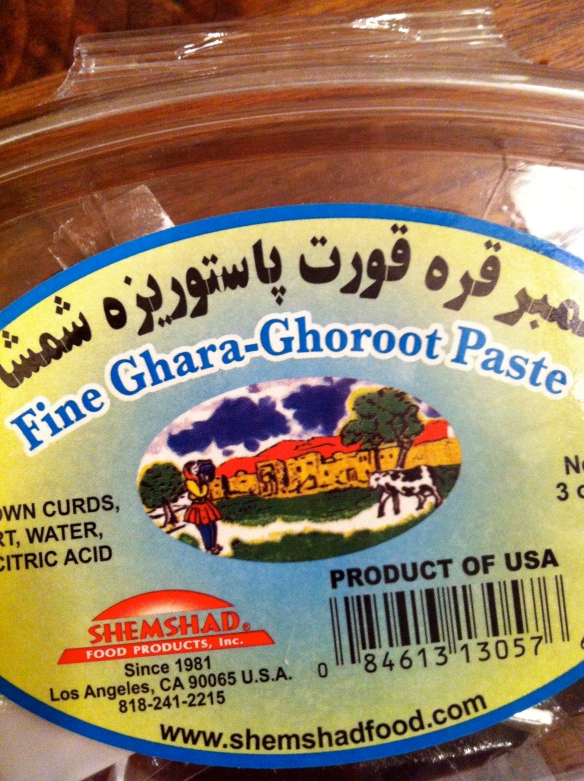 I also picked up some intriguing looking boxes of paste at the check out counter which you can apparently eat with the ice cream: sour cherry and something called Ghara-Ghoroot……..made with ‘brown curds’, among other things! We decided it was not unlike Vegemite to taste…..

We arrived back in Australia only hours before Uncle D got to Sydney himself. A wonderful reunion with the cousins in Darling Point, a delicious slap up meal, and then we all fell into bed to rid ourselves of jet lag.

Baked a fragrant little tea cake the next day. I had bought a whole lot of pears when out on the big stock-up-again grocery run. Uncle D and I had been looking at bathroom hardware during the drizzly morning, and he had also gallantly filled my car’s tires with air. In the afternoon, I dropped him at the MCA to see the Anish Kapoor exhibition. I knew that by the time the brothers got home from the galleries in the city they’d be tired and hungry. The cake came out of the oven just as they walked in the house. The kettle was boiling. Outside was wet. It was a good move, baking that pear cake. Here’s the recipe. 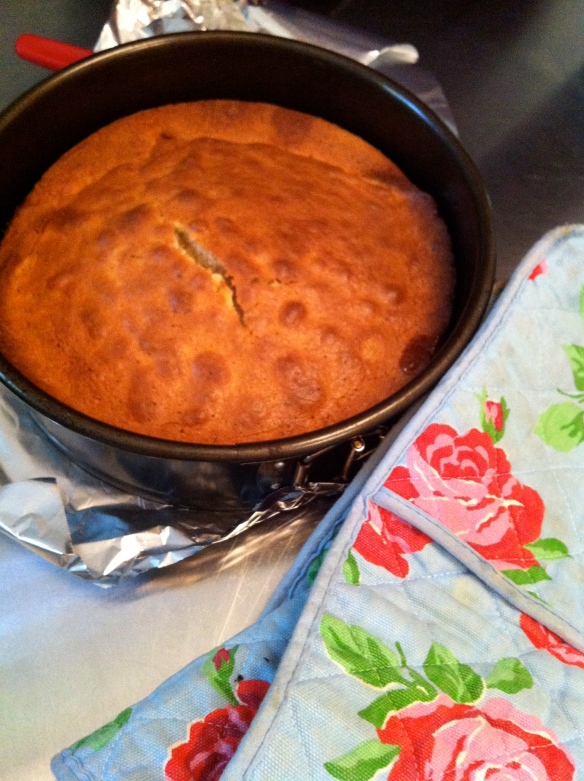